Gods of the North (Live) 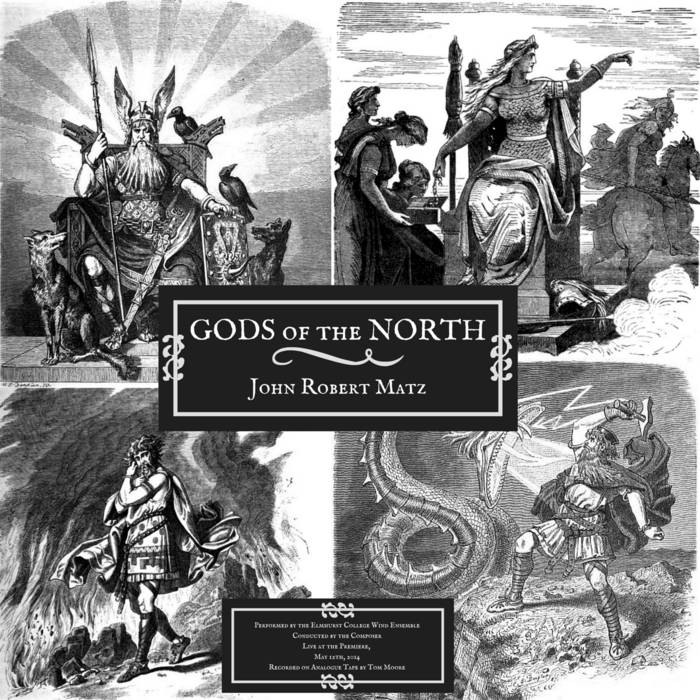 Gods of the North
Recorded live at the world premiere on May 12th, 2014.
Commissioned by and Performed by the Elmhurst College Wind Ensemble under the artistic direction of Professor Judith E. Grimes and captured in analog on tape by Tom Moore.

A Word from the Composer:
Gods of the North was a epic saga to realize and an absolute thrill to see come to fruition. I've always loved mythology, and while Greek myth has always achieved more popularity, ever since I was a small child I felt a special affinity for the tales of the ancient Norse. Getting the chance to write for my alma mater's top ensemble gave me the chance to put those old tales into music.
I hope you enjoy Gods of the North.

Odin, also known as the "Allfather", is the ruler of Asgard, the realm of the gods. Odin is frequently depicted as a god of war, intellect, and mysticism, and is served by two ravens, Huginn (mind) and Muninn (memory), through which he watches over Midgard (our realm).

Beginning with a more contemplative moment, the piece depicts the ravens' daily reconnoiter, as Odin's theme is stated by a solo horn. Unfortunately, his raven companions bear ill tidings that bring Odin's more warlike qualities into play, and he prepares for bloody conflict, arming himself with his magic spear, Gungnir, and accompanied by the barks of his wolves, Geri and Freki.

Frigg is Odin's wife, queen of the gods, and highest-ranked amongst the goddesses in the Norse pantheon. She is the only other individual permitted to sit upon Hlidskjalf, the high seat from which Odin watches over the world. A goddess of considerable power, she is a master of diplomacy, able to convince her husband to that her wishes are his, and goes so far as to obtain oaths of protection from all things to ensure her son, Baldr, is safe from harm. Alas, due to Loki's trickery, Baldr is killed, sending Frigg into mourning.

Frigg's theme was written in imitation of the droning cadence of an ancient nordic bowed instrument called the tagelharpa, even as the middle section depicts a funereal chant for her lost son. A brief outburst of anger is leveled towards the subject of the next movement before relaxing into a controlled placidity, befitting the queen of Asgard.

Half-god, half-jötunn (giant), Loki is a mercurial figure in Norse myth, depicted helping as frequently as he is shown hindering the other gods and humanity in their tasks and quests. A trickster, Loki has many magical abilities, including the ability to change form, a talent he uses with aplomb throughout the various Eddas of recorded myth.

Eminently unpredictable, Loki's theme winds itself around an angular tenor saxophone solo before devolving into a section depicting his dabbling with shapeshifting into some rather familiar aspects.

Odin's most famed son, Thor, god of thunder, wields the magical hammer, Mjöllnir. He is known for his grand adventures, battles against evil, and his protection of humanity. He brings a rogue Loki to justice after Baldr's death, and is foretold to finally perish during Ragnarök after winning an epic battle with his longtime nemesis, the giant world-serpent, Jörmungandr.

In this last movement, we hear Thor's theme rising, as if for one final battle, even as the wind picks up, and the fight is met. As Thor's fury begins to make itself heard, Mjöllnir's theme, depicted as the flashing brass of trumpets and trombones, combines with the impact of the lightning and thunder it calls forth. As the tide of battle turns, Thor's theme takes on a more heroic aspect, even as hints of Loki's machinations begin to weave their way through the fight. At the climactic moment, our hero must make a decision that will either save or doom us all, as the sun rises once more over Midgard.

And you can't get it out of your head.

Bandcamp Daily  your guide to the world of Bandcamp